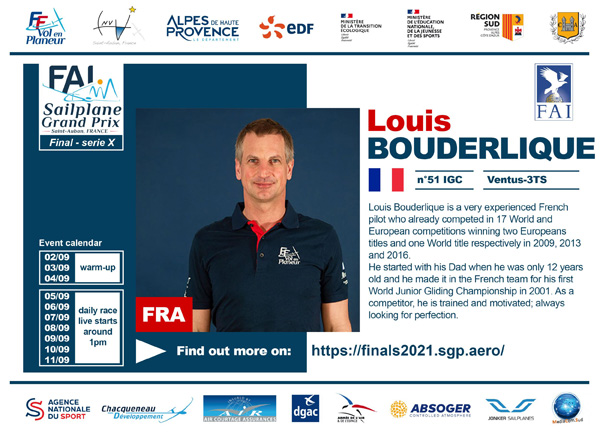 Louis Bouderlique is a very experienced French pilot who already competed in 17 World and European competitions winning two European titles and one World title respectively in 2009, 2013 and 2016.

He started with his dad when he was only 12 years old and he made it in the French team for his first World Junior Gliding Championship in 2001. As a competitor, he is trained and motivated. When asked what he likes in competition, he replied: “What I love the most is the research of perfection in the path of my glider in order to save time for the completion of the task.”  He is also known for enjoying being with his family on the airfield, going for bike tours and organising great times for him and his friends even during the high end championships to take the pressure down.

He knows the Grand Prix format well, reaching the 3rd place in 2019 for his first participation on a GP Final. In addition, he loves flying in the Alps. Some say that his nickname is the “Eagle of Rieti” as he won the “Coppa Internazionale del Mediterraneo” two years in a row.

In St-Auban, he will participate in his 2nd Grand Prix Final. During this competition, he will be on his playground, where he is training with the French team every year. We will be following him attentively during the Live as he is one of the pilots who has the will, the skills and the experience to win.