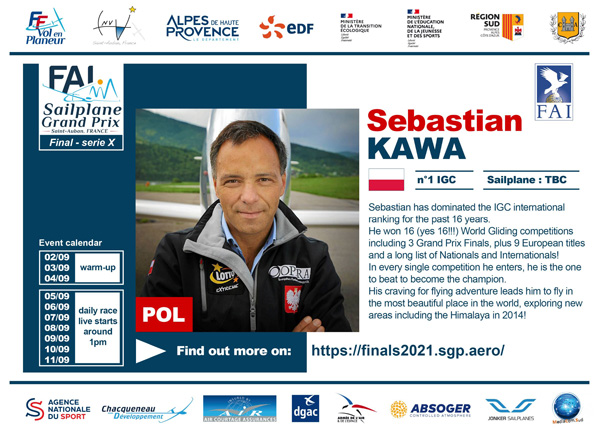 We cannot talk about Grand-Prix pilots without talking about Sebastian Kawa from Poland.

Sebastian has dominated the IGC international ranking for the past 16 years. He won at least 16 (yes 16!!!) World Gliding competitions including 3 Grand Prix Finals, 9 European titles and a long list of Nationals and Internationals! In every single competition he enters, he is the one to beat to become the champion.

When asked what he likes about flying, he replied: “Great possibility to fly to the places where no one can get”. This craving for adventure, leads him to fly in the most beautiful place in the world, exploring new places including the Himalaya in 2014!

In the Grand Prix competition, Sebastian likes the intensity of the race which leaves almost no place for tactical games. He is, for sure, focused on winning and following him during the Live Event with commentators is always impressive and enlightening. He is very often crewed by his dad, who is bringing great historical stories, humour and songs for everybody's entertainment. If you ask yourself, what Sebastian did during the past 2 years, when gliding competitions were really limited, he went back to his former professional activity (doctor) and helped the local hospital. But don't worry, he came back to racing, and won the 15m world title two weeks ago.

In September, he will be one of the favourites. He knows the area very well, enjoys mountain flying and he won the Grand Prix of St-Auban in 2008. Despite to his impressive palmares, the other competitors will certainly keep in mind that in 2015, he was “only” second during Sisteron Grand Prix Finale. As in all the Final, the competition will be very interesting with Sebastian.

To know more about him, you can find here his fast and curious interview.