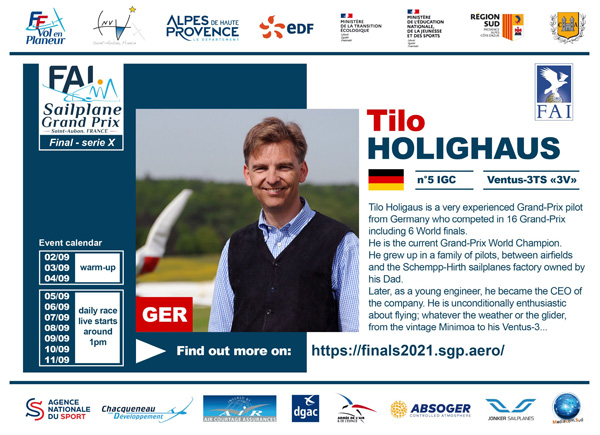 To introduce this 10th Final, let’s start with the current Champion: Tilo Holighaus

Tilo Holighaus is a very experienced Grand-Prix pilot from Germany who competed in 16 Grand-Prix including 6 World finals. He is the current Grand-Prix World Champion.

He grew up in a family of pilots, between airfields and the Schempp-Hirth sailplanes factory owned by his dad. Later, as a young engineer, he became the CEO of the company. He is unconditionally enthusiastic about flying; whatever the weather (his latest outlanding was in a carpet of 20 cm of snow) or the glider (from the Grunau Baby to his Ventus-3).

Even if at home, he is enjoying long flights, he told us last year why flying the Grand-Prix is different: “Grand-Prix Flying is exciting: fast tasks in beautiful places together with good gliding friends. I like the sportive and direct comparison of gliding skills. In this format you win by making better, active and independent decisions instead of just trying to minimize your mistakes like at other competition formats.”

His strategy of flying his own way made him famous with the Live commentators following his route choice. He is also the type of pilot who stays after the flight to share his experience and his family, when they can join, always brings smiles with them. Always good time with the Holighaus team!

He knows St-Auban and the southern Alps well and finished respectively 7th and 9th at the Grand Prix of St-Auban in 2008 and Sisteron in 2015. We will follow him with interest next September!

To know more about him, follow his interviews Fast and Curious.