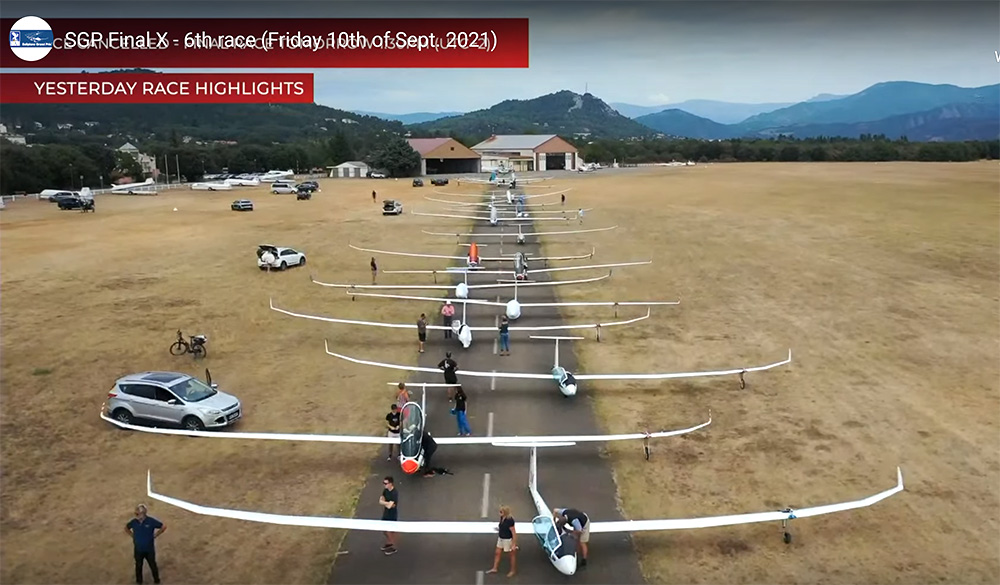 The 10th FAI SGP Finals took place in spectacular style at St Auban 5 - 11 September. After the uncertainty of the past year, it was wonderful that 20 of the top glider pilots in the world were able to meet and fly together safely. At the end of six racing days, watched by audiences all over the world, a new Sailplane Grand Prix world champion was declared.

The list of pilots included numerous world champions and record holders. Many of the pilots have vast experience, while young pilots with far fewer flying hours were also among the participants. 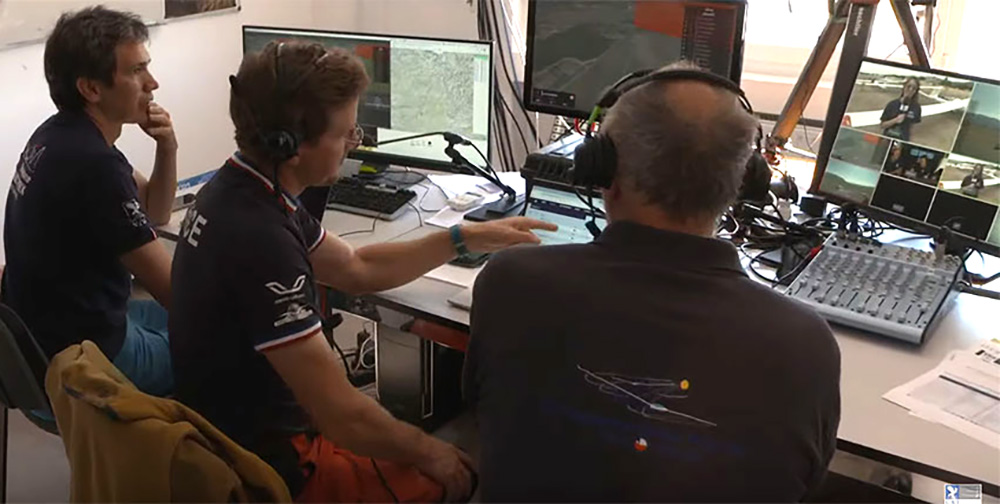 Media Production
The media production of the SGP took another leap forward this year helped by a partnership of the FAI/SGP team and the Fédération Française de Vol en Planeur (FFVP). Video interviews with the pilots before and after their flights were conducted by Claire Heliot, weather and pilot briefings were streamed live to a world wide audience. Live race coverage for the International followers in English by Brian Spreckley and Benjamin Neglais was streamed to viewers from Australia to Brazil and all over Europe. Simultaneous coverage was delivered in French on the FFVP website with Eric Napoleon from Centre National de Vol à Voile (CNVV) and Aude Untersee.

In addition, live video was streamed from the cockpits of competitors and chase planes, which brought the conditions and excitement of the competition to viewers around the world. The races were streamed in a 3D computer simulation with amazingly realistic detail. 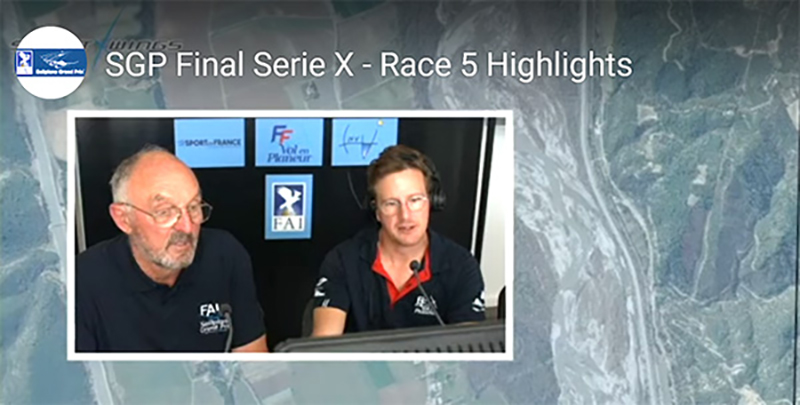 Virtual SGP
For the first time a virtual contest was held in the evening after the live races with competitors from 20 countries flying in a simulated environment competing in real time from their own homes across the world. The Virtual SGP Contest Director Antione Havet gave live race commentary as viewers followed the races.

The broadcast included guest speakers and live interaction with the audience. With high production values viewers were brought into the races and the region of the Southern Alps as never before. The event was a fantastic promotion of the sport of gliding and France. 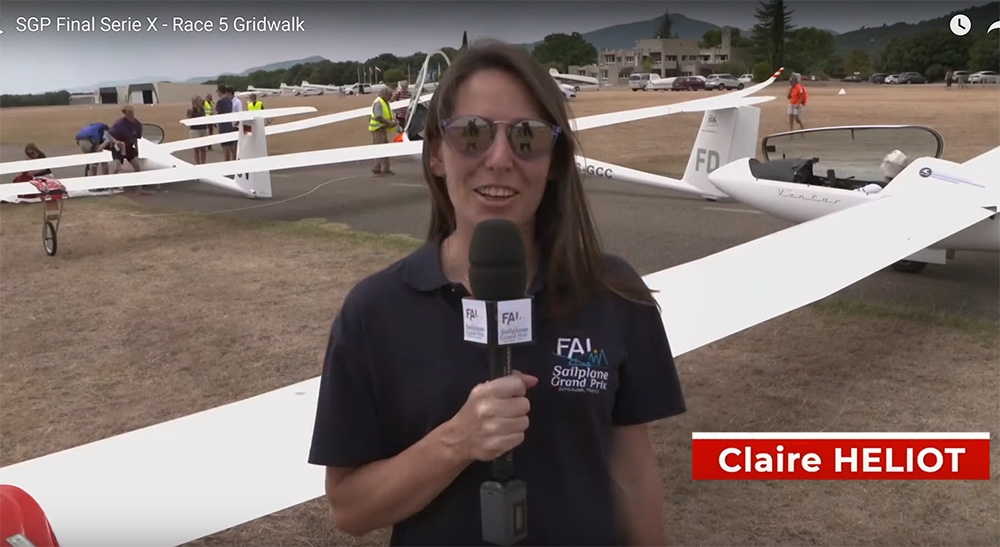 The Contest
The weather looked good for the first race, won by German Mario Kiessling. Multiple-time World Gliding Champion Sebastian Kawa from Poland finished in 2nd place. The next day, after a fast race Mario Kiessling won his second day, finding his own path to beat the competition.

On the third day, Kiessling made a spectacular comeback after falling away from the leading pack to beat Kawa across the line for his third Day win. Now with 30 Grand Prix points, 'Super Mario' was nine points ahead of Kawa with four more race days to go.

More Races to come
With a potential four more races to come, it would be the most consistent pilots who ended up on the champions’ podium at the end of the championship. Kiessling would have to place at least 3rd each day to block Kawa from overtaking his points score.
Fourth Race
Boštjan Pristavec from Slovenia stormed across the line to take 1st place from Kawa on a 'tricky' fourth day. Kiessling fell to the back early in the race, finishing with zero points to add to his score of 30. Now that Kawa, after finishing second, had 29 points and was just one point off the top position, the pressure was on Mario for the remaining races.

Master of the Sky
On a difficult, overcast day, Sebastian Kawa once again displayed his mastery of the sky and won Race 5. Keissling finished in 2nd position after a close final glide behind Kawa. Defending SGP Champion Tilo Holighaus from Germany raced forward to close the distance between him and Keissling but had to be satisfied with 3rd place.
After five races, Kawa now had 39 points. Keissling, having gained 8 points, was edged into 2nd place with 38 points.

Final Race
On Saturday the final race day, the weather for the final race looked excellent.
Ahead of the race, Brian Spreckley, said, ‘It’s been going really well. We have had a mix of weather – some really good conditions with some difficult conditions. We have flown into the mountains and the plains to the south, so it has been a good mix.

‘We have seen quite a change in the results everyday as well. Two pilots have come to the top of the scoring – Sebastian Kawa and Mario Kiessling – and they have done that by flying very consistently. Beneath that, we have seen quite big changes in the daily placing.

‘We are looking forward to a good final. Mario has to beat Sebastian by one point to win, so we will see. We are expecting an exciting race.
‘In truth, we have two races. One for 1st and 2nd places, and another for 3rd and 4th. Maximilian Seis is too far behind to catch the top two, but Katrin Senne from Germany is only four points behind Max. Behind them are all the other pilots who will be waiting for them to make a mistake so they can race ahead.

‘In Grand Prix racing, there are always opportunities to do something different and pull ahead. The question is, can you keep it?’

The Race
The calculus was very straightforward for the top two pilots in this race. Kiessling had to beat Kawa, and Kawa had to beat Kiessling.

There was only one pilot who could overtake Kawa, but there were six pilots who could take 3rd place for Seis.

Sebastian and Mario were now in a straight chase. But soon Mario fell 5km behind. Sebastian now seemed to have secured his top position and it appeared to be nearly impossible for Mario to recover the distance to catch up.

Nevertheless, what a competition for him! He was assured of second place behind Kawa, who added yet another World Gliding Championship to his impressive list.
Race for 3rd
Now the focus of the race shifted to the third and fourth positions. Seis split away with fellow Frenchman Louis Bouderlique, and Senne was stranded in the wrong position to challenge Seis.

Day Winners
Tilo Holighaus was first across the line followed by Maximilian Seis, who cemented his 3rd place podium position. Louis Bouderlique crossed the line in 3rd. Katrin Senne was next, finishing the contest in 4th position overall.

10th FAI SGP FINALS WINNERS
Sebastian Kawa 1st
Mario Kiessling 2nd
Maximilian Seis 3rd
What a gripping conclusion to the championships it was, with drama up to the last kilometre. After six race days out of a possible seven, the 10th SGP Finals finished in style. What a wonderful gliding championship this has been!

Sadly, it is now over. But we await Series 11 with anticipation. We look forward to being with all the people again who have been following this great competition for the next SGP Finals – location to be announced.

You can watch all the  video coverage  of the races,  pilot interviews and more at Race Coverage