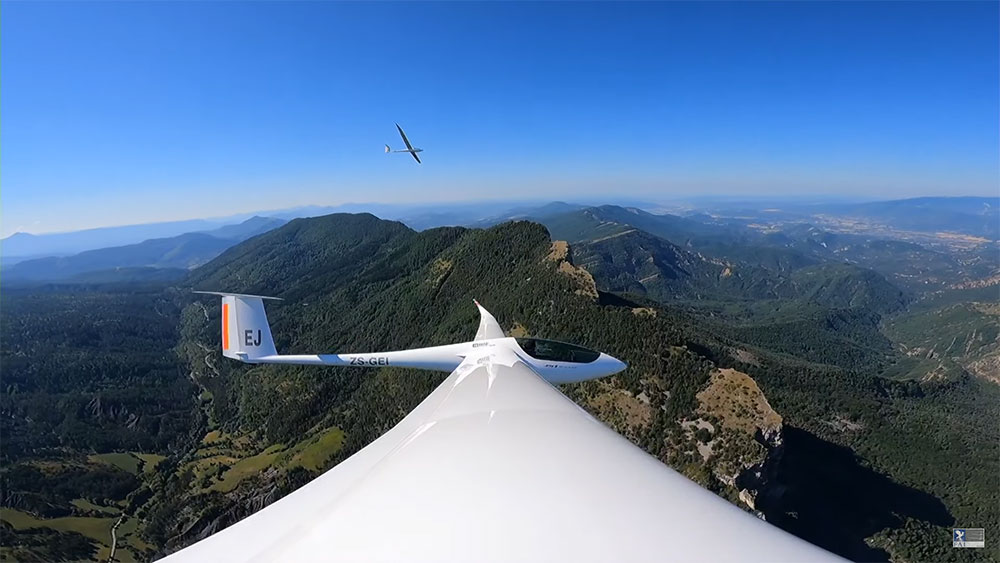 After five race days, the weather for the final race looked excellent, and the pilots are refreshed after a rest day yesterday. The excitement was building, but the competitors looked relaxed. Who would end up on the podium?

Ahead of the race, Brian Spreckley who, with Benjamin Neglais, provided live commentary for the races said, ‘It’s been going really well. We have had a mix of weather – some really good conditions with some difficult conditions. We have flown into the mountains and the plains to the south, so it has been a good mix.

‘We have seen quite a change in the results everyday as well. Two pilots have come to the top of the scoring – Sebastian Kawa and Mario Keissling – and they have done that by flying very consistently. Beneath that, we have seen quite big changes.

‘We are looking forward to a good final. Mario has to beat Sebastian by one point to win, we will see. We are expecting an exciting race.

‘In truth, we have two races tomorrow. One for first and second places, and another for third and fourth. Maximilian Seis is too far behind to catch the top two, but Katrin Senne is only four points behind Max. Behind them are all the other pilots who will be waiting for them to make a mistake so they can race ahead.

‘In Grand Prix racing there are always opportunities to do something different and pull ahead. The question is, can you keep it?’’ 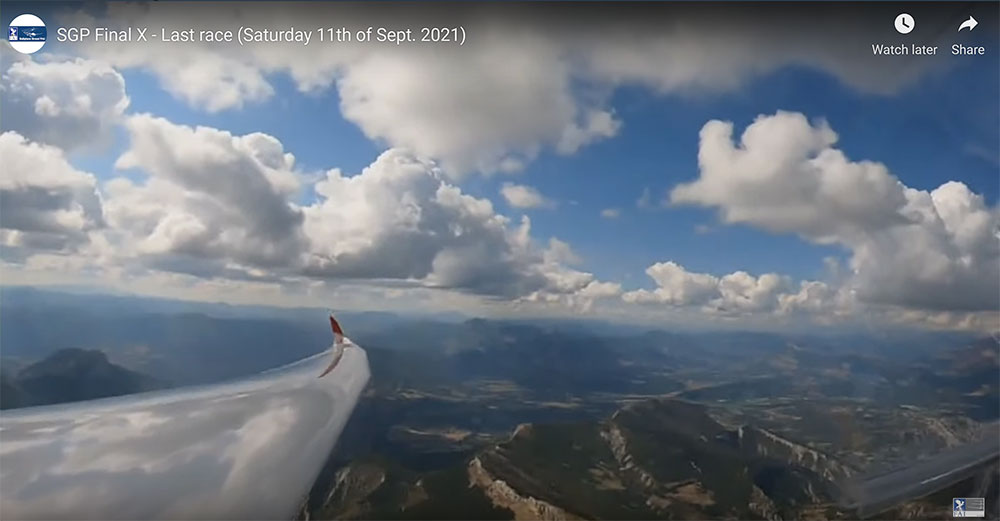 The Weather
The front had left the area as high pressure was building up, and the airmass was post frontal. It was a clear, dry day with cumulus up to 2,500m to over 3,000m in the mountains, and no high cloud was forecast. The surface wind was south and southwest in the upper levels. There was also the likelihood of convergences in the Verdon Valley. It looked like a superb soaring day. 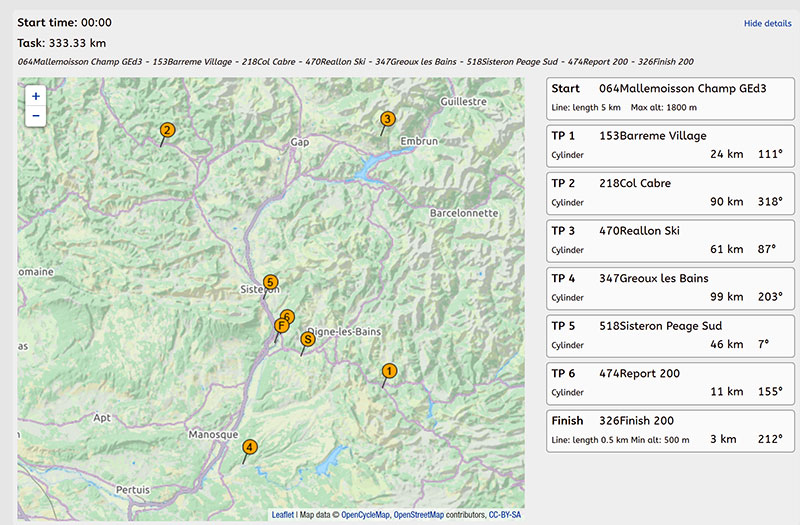 The Task
The 333km task started at Mallemoisson. After the start, the task went 24km east to Barreme Village, 90km northwest to Col Cabre, 61 km east to Reallon Ski, 99km South to Greoux les Bains, 46km north Sisteron then 11km to the reporting point and 3km further to the finish line at 600m.

On the final day of the SGP, the winner is awarded 11 points instead of ten. But the calculus was very straightforward for the top two pilots in this race. Mario had to beat Sebastian, and Sebastian had to beat Mario.

As the fleet head crossed the start line, Brian remarked, ‘Today, Sebastian has to look over his shoulder. Mario only has to look forward.

‘Max will also be looking over his shoulder. He has several pilots behind him who can catch him up.’ There was only one pilot who could overtake Sebastian, but there were six pilots who could take third place from Max. 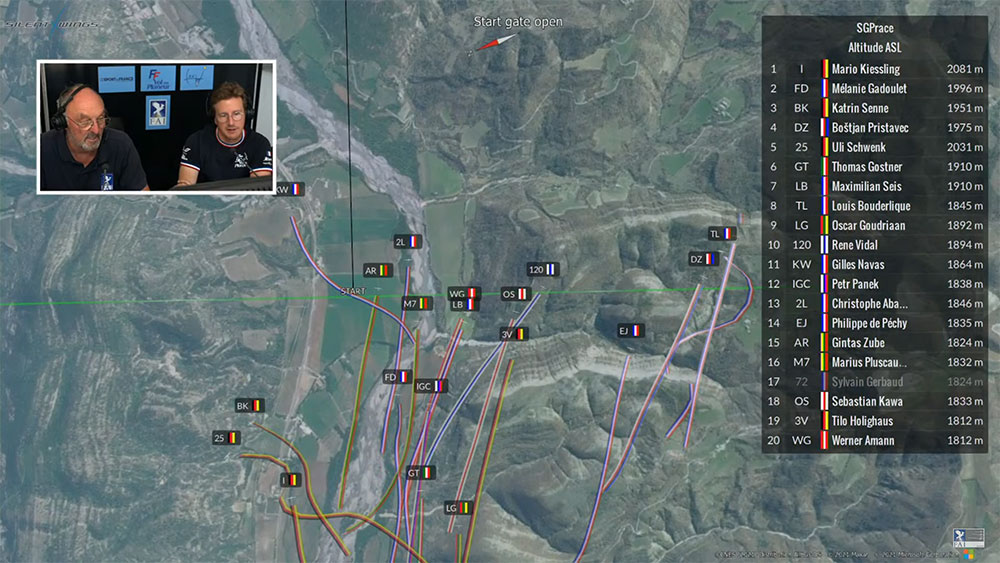 Sebastian changed direction away from the pack early on, as did Mario, and the fleet began slowly drifting in their direction to follow them.

Two groups made the first turnpoint with Mario in the lead and Sebastian a bit lower and behind.
Mario’s group were at around 1,500m while the followers were over 2,000m. After the turn, Mario’s group split to the slope of Cousson to the east while Sebastian went west. 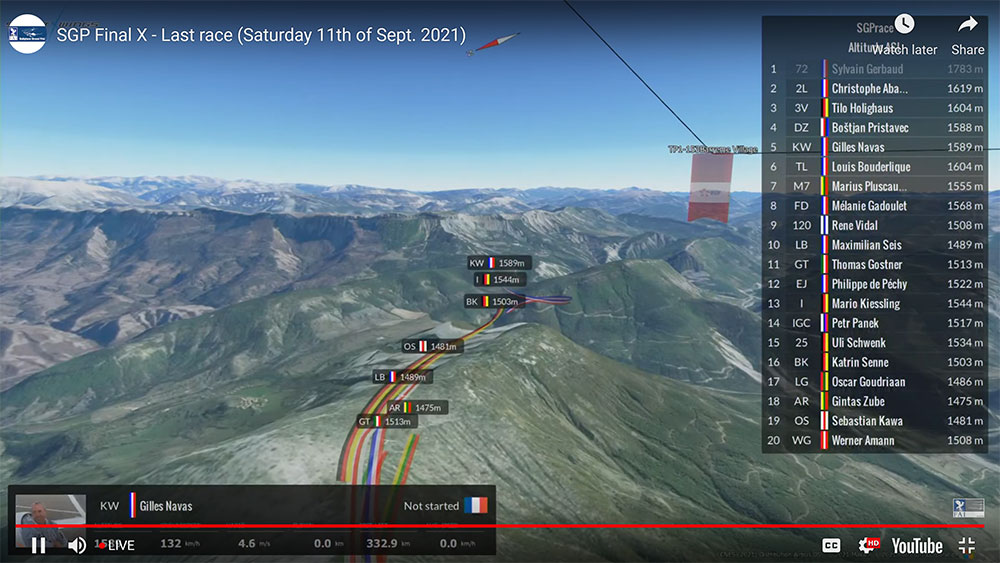 Several pilots climbed to over 2,000m at this point, but the leaders were much lower. This marked a divergence in strategy, depending on whether the pilots believed the lower or higher route had the better energy.

Now the fleet slowed down and they all needed to climb. Mario made a good climb and carried on with Sebastian 300m below, although they were still close together. Could Mario pull ahead?

As they headed into the slopes of St Genis, Mario pushed ahead low. with Sebastian following. They stopped to climb and Sebastian began to catch up with Mario. They were now all climbing under good cumulus with 20km to the next turnpoint of Col Cabre. 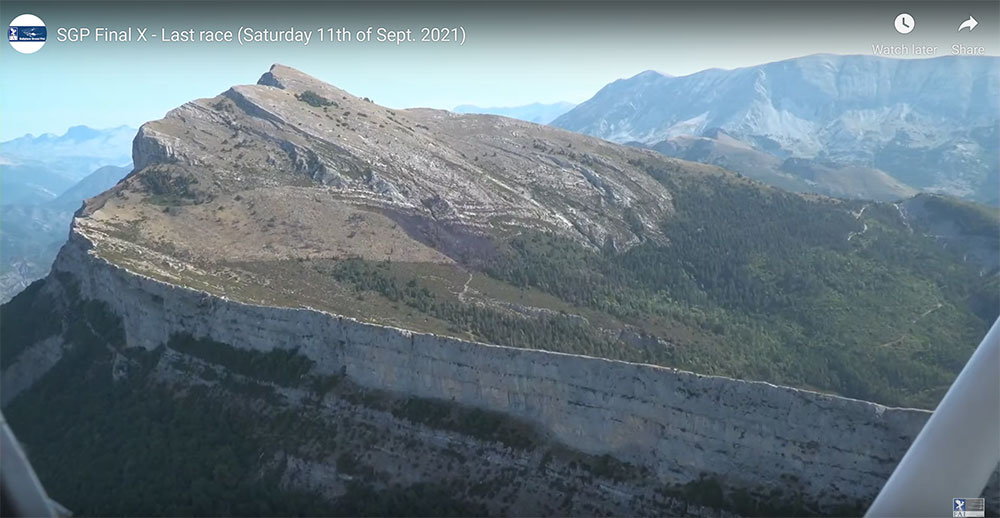 At the next thermal, they all came together and the race began again. Sebastian left first with Mario now following. They made the Col Cabre turnpiont together.

The next turnpoint was where the Northern and Southern Alps converge, so the ridge was split between north and south winds. But they took this turnpoint much higher than the last at over 2,600m.

A group leapt ahead of Mario and Sebastian on Les Apôtres, which they left above 2,300m.

Sebastian did not continue on Les Apôtres and took a different route. 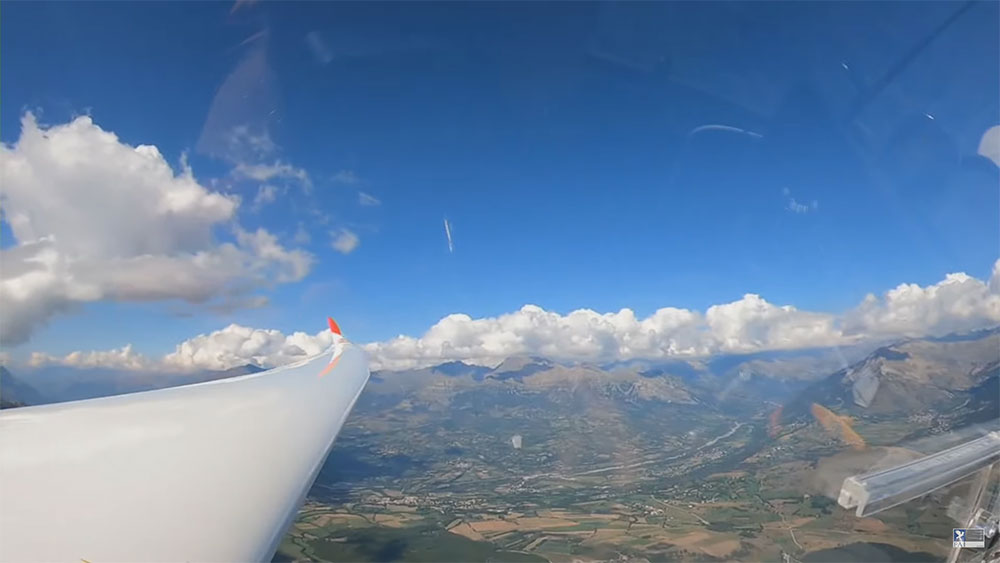 There was another split in the fleet in the foothills of Pic de Bure. Sebastian changed tack and climbed with Mario just behind in the same thermal and they could surely see each other.

Sebastian and Mario were now in a straight chase climbing to 2,500m then 2,700m.

Heading to Chabrières, Philippe de Péchy led the way into the tunpoint followed by Sebastian but Mario fell 5km behind.

Mario dropped further behind and Philippe led across the valley with Mario much lower. The leading pack were now together 10km faster and Mario did not find a climb and went lower and lower and further behind. 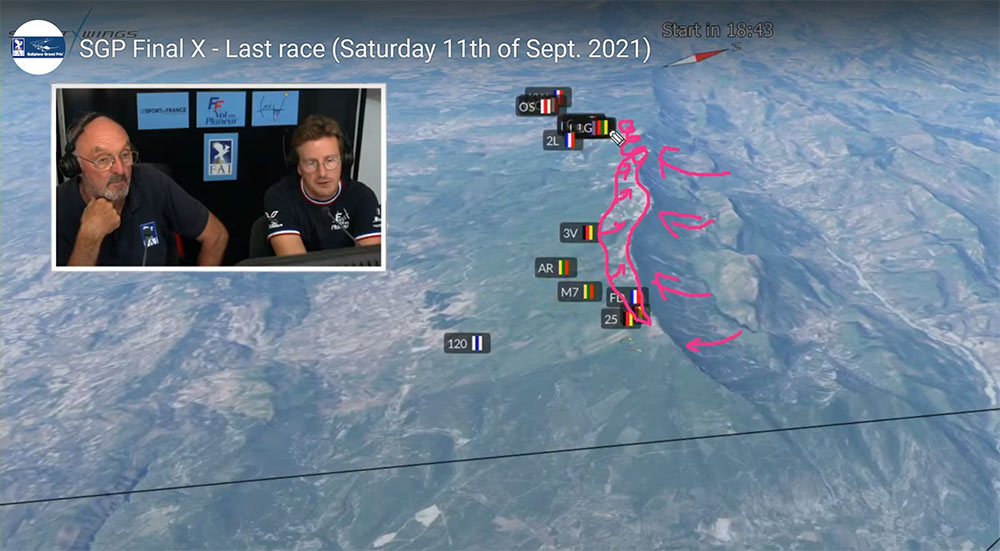 It now seemed that Sebastian had secured his top position and it seemed nearly impossible for Mario to recover the distance to catch up.

The leaders were now on the Parcours at cloud base and from now on it was a run to the finish. But closer to St Auban the sky looked weaker. Philippe led the way over mountains again but as they headed south the thermals became weaker and lower.

Now the point scoring group became apparent while Mario seemed to desperately need a climb. From the start, Mario had seemed to approach this contest with a higher risk strategy than many other pilots. That worked brilliantly for him as he won three days in a row and also took a second position. But on the other two race days, including today, his strategy failed. Nevertheless, what a competition for him. He was assured of second place, behind Kawa who, as we all know, does not like to be beaten.

By the time the leaders reached cumulus on the plateau Puimichell they were down to only 800m. Katrin Senne was with the main group that included Sebastian. But now his motivation may have begun to wane. He surely knew that Mario was out of the race and that he had won the championship. Max split away with Louis Bouderlique and Katrin was stranded in the wrong position to challenge Max.

The pilots at the back were low and needed a climb. Crossing Puimichell, they came close to final climb but before the last turnpoint, they needed one more climb to finish the task at 600m.

The fleet split again with some gliders in the valley and others on the hills, all searching for a climb.

After passing the overdevelopment, the sky was blueing out towards St Auban. With 30km to go Max was behind and lower that Katrin as they moved around another shower.

Sebastian headed back to St Auban without completing the task, but assured of his first place, his latest in his incredible list of world gliding championships.

Now Max and Louis pulled ahead of Katrin and pushed to the finish. Katrin was above final glide, while Max, although lower, was ahead.

Meanwhile, Tilo Holighaus was below final glide with only 14km to go. However, he managed his energy well and crossed the line in first place for the day.

Many gilders were now too low to finish the task and started their engines. 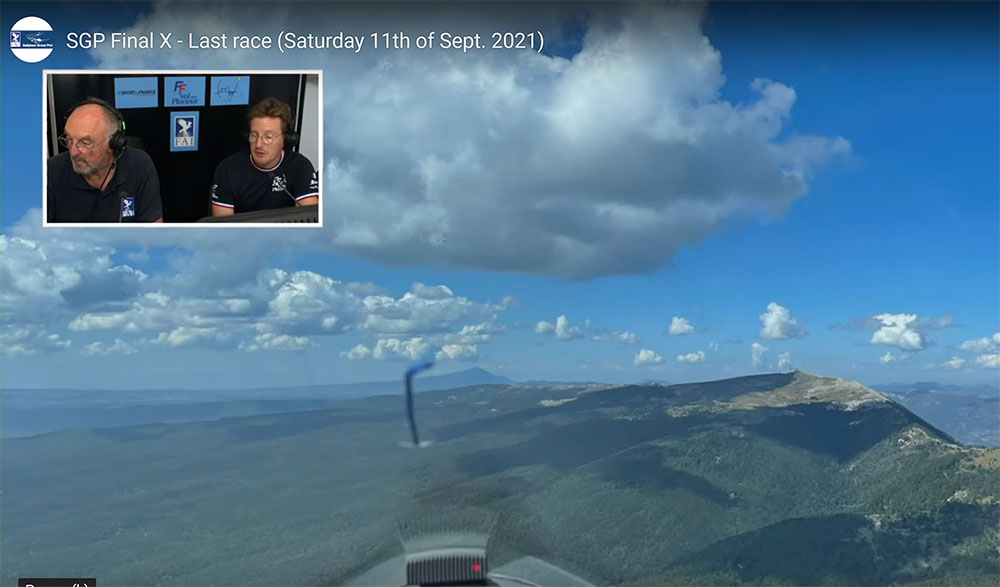 Katrin Senne was next, finishing the contest with 24 points that put her in 4th position overall. Katrin was followed by Boštjan Pristavec, Gilles Navas, Werner Amann, Gintas Zube and Thomas Gostner. These nine pilots were the only ones to complete the task, with the remainder firing up their engines or heading directly to the airfield.

What a gripping conclusion to the championships with drama up to the last kilometre.

After six race days out of a possible seven, the 10th SGP Finals finished in style. What a wonderful gliding championship this has been.

Sadly, it is now over. But we await Series 11 with anticipation. We look forward to being with all the people again who have been following this great competition for the next SGP Finals – location to be announce. 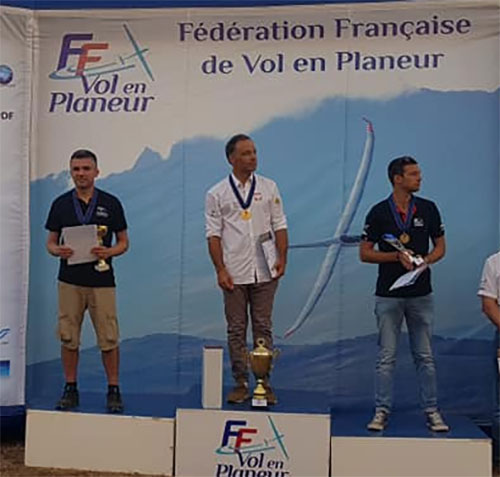 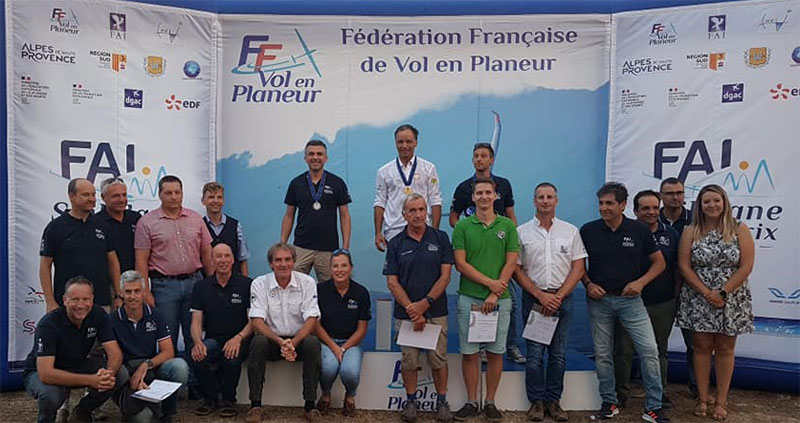 The 20 competitors in the 10th FAI SGP Finals St Auban