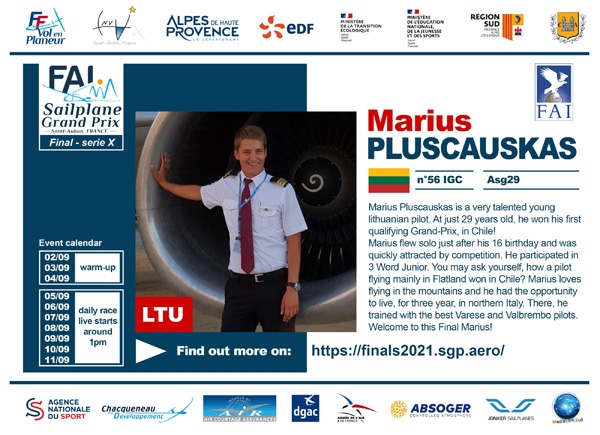 Marius flew solo just after his 16 birthday and was quickly attracted by competition. He participated in 3 Word Junior Gliding Championship in Germany, Poland and Australia. In Chile, it was his first Grand-Prix Competition ever. You may ask yourself, how a pilot flying mainly in Flatland won in Chile? Marius loves flying in the mountains and he had the opportunity to live, for three year, in northern Italy. There, he trained with the best Varese and Valbrembo pilots. The other factor is that Marius loves to compete and … to win!  When asked how Chile was, he replied: “Experience and thrill was huge. Everyone who loves mountains should go there! I think the Grand Prix format is the best way to compete in gliders. I liked that during GP flight if you are behind - you have to figure out a different path or strategy in order to win. You are not rewarded simply for finishing 10 or 30 seconds behind.”

He may not be the most experienced pilot in St-Auban but he showed us that he doesn't need to know the place to win. We are looking forward to following him on the French ridges checking if he can find better options and energy lines than the other pilots.